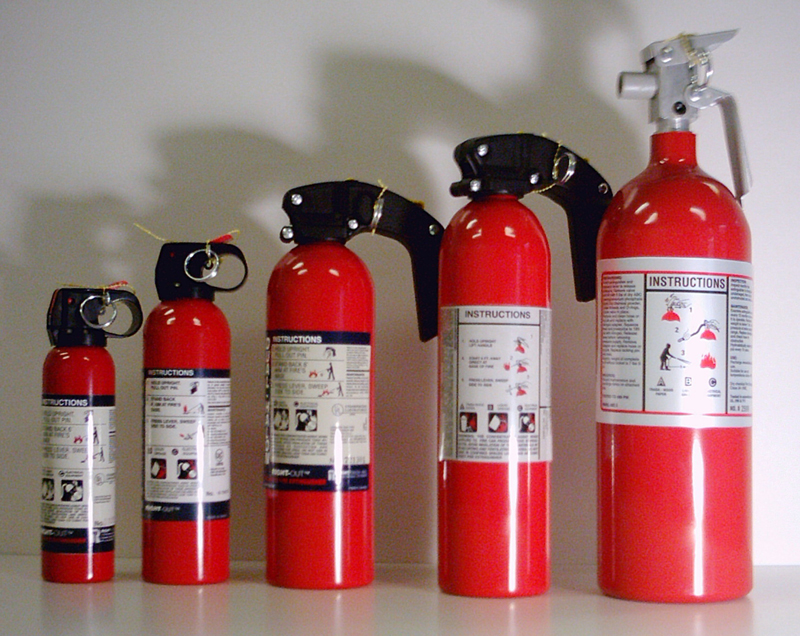 Now that we’ve covered what you should not use in an aircraft, let’s look at what you should: Halon fire extinguishers. According to Protection R.T.,  Halon, or halogenated hydrocarbon, is a blend of carbon, fluorine, chlorine and bromine. But why is it so ideal for aviation use? Well, it’s clean, non-volatile and electrically non-conducive. Consider these advantages:
Halon is an effective agent on Class B and C fires, the ones you’re most likely to see in an aircraft.

Sounds perfect, right? Well, there are a few drawbacks. We said that Halon has low toxicity. But it’s not benign or entirely non-toxic, and you wouldn’t want to introduce it to your respiratory system given the choice. “But everyone, including the FAA, recognizes that it’s better to put out the fire effectively than to worry about breathing the Halon,” says George Ferris, Vice-President for PRT. “Breathing the carbon monoxide from the smoke is bad in itself. When you do spray Halon, however, try to ventilate the space as soon as possible.”

A perceived disadvantage is availability. As a chloro-fluorocarbon (CFC), the gas is subject to a ban that took effect in 1994, and no new Halon is being made today. The only source is Halon recycled from existing extinguishers and brought up to mil-spec standards. In the U.S.and Canada, it is legal to buy, sell and use Halon fire extinguishers for aviation, commercial and residential applications.

But according to Ferris  no Halon shortage is imminent and “the eventual demise of Halon will come not from insufficient supply, but from the development of an equally effective agent that does not damage the ozone layer and is relatively inexpensive.” He says PRT estimates that Halon will be available for at least the next 10 years.

Even so, the search is on to find suitable replacements for commercial aviation applications. A few alternatives are already available—Halotron I is an example—but they’re still more expensive and only half as powerful as Halon. General aviation will undoubtedly benefit from whatever advancements are made in that arena.

Halon comes in three primary types—Halon 1211, Halon 1301 or a blend of the two. Halon 1211 is a liquid streaming agent—it’s stored as a liquid in the cylinder, but it rapidly turns into a gas when discharged. Nitrogen is used as the propellant, like in most fire extinguishers. The benefit of liquid storage is that you can shoot the agent 6-15 feet on discharge, but the quick conversion to gas allows it to start working on the fire immediately. PRT says that the majority of Halon extinguishers sold use straight Halon 1211.

Halon 1301 is a flooding agent that is stored as a gas and discharges as a gas. But according to PRT there are no 1301 portable extinguishers in use except in the military, and you can’t buy one.
Halon 1211-1301 extinguishers contain a proprietary blend of the two types of Halon. The benefit here is that the 1301 component of the blend acts as a propellant in the place of nitrogen, which means that both the propellant (1301) and the agent itself (1211) work together to put out the fire.

“A Halon 1211-1301 blend is  more effective than straight 1211, because you have two distinct agents working on the fire,” Ferris says, “as opposed to a mix with nitrogen, which does nothing to put out the fire. This has been verified by Dupont who manufactured the halons before production was banned in 1994.

Another huge economic advantage of the 1211-1301 blend is that the extinguisher itself is virtually maintenance free, with no pressure gauge. Gauged units (like straight Halon 1211 extinguishers) are subject to maintenance regulations determined by the National Fire Protection Association (NFPA): monthly visual inspections, a six-year maintenance check and a 12-year hydrostatic cylinder test are required. Both maintenance procedures involve removing the extinguisher from the aircraft and taking it to an appropriate service company.

But the FAA considers the blended units disposable extinguishers because they don’t have pressure gauges and can’t be recharged. Monthly inspections consist of hefting the unit to check the weight and visually inspecting the unit for damage. In addition, the extinguisher weight must be checked against the published gross weight every year to verify that no leakage has occurred. These minimal requirements make blended Halon units ideal for the GA user who wants to mount the extinguisher in the airplane and basically forget about it.

For light aircraft use, Halon extinguishers typically come with a 2B:C rating or a 5B:C rating. According to NFPA Code 408 (Standard for Aircraft Hand Portable Fire Extinguishers), a 2B:C-rated extinguisher is considered suitable for a one- to four-seat plane. For larger aircraft, you may want to consider a 5B:C unit. Either is suitable for most light aircraft fires, and either is small enough to be maneuverable in the cockpit.

The fine print on any extinguisher will state not to use it in confined spaced of less than X cubic feet—check to make sure X isn’t smaller than your cockpit, and you’ll be fine.

How to Help Yourself

Inhalation of toxic gases in smoke is a primary cause of fatalities in most fires, whether in an aircraft cabin or a high-rise building. Have a plan and know your emergency procedures. An adequate, well-placed and well-maintained fire extinguisher can prevent small electrical fires from escalating into major problems that will jeopardize structures or incapacitate the pilot. In any case, the first priority, after flying the plane, should be extinguishing the fire.
While modern aircraft benefit from flame retardant materials and high-quality extinguishers, survivable crashes are often followed by fire. In this case, the first priority for pilot and passengers should be to exit the aircraft. But if you can’t get out—due to injuries, damage to the aircraft or a fire standing in your way—an extinguisher can control a post-crash fire well enough to save lives. This being said, the pilot and passengers should be able to reach the extinguisher even if they are unable to get out of the aircraft. This means mounting it where it can easily be reached. And never allow an extinguisher to roll around loose in the cabin.

View all our distributors