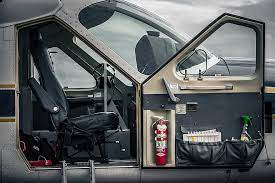 Halon is the only practical, cost-effective option for a fire extinguisher. A 2.5-pound bottle is the best choice. Cockpit Fire Protection Fire extinguishers abound in type, size and firefighting agent.

It’s underneath the pilot seat or in some other out of the way, out-of-mind location. But when you sniff smoke in flight or you over prime your Lycoming and start a stack fire on the ramp in January, your fire extinguisher may be your best friend. Do you have one?

Perhaps you haven’t looked at it in years and what a shock it would be to have it fizzle when you need it most. Or to realize in the heat of battle that you have the wrong type of extinguisher.

Perhaps you picked up a dry chemical bottle from your local Wal-Mart to replace the extinguisher that came with your 1971 Bugsmasher. You may survive the fire but after use, the corrosive effects of the chemical agent may do more damage to your avionics and wiring than the fire would have.

Might there have been a better choice? Since 1993, the manufacturing of Halon, the fire extinguishing agent of choice for aviation, has been banned by international treaty because Halon released into the atmosphere causes ozone depletion. Today, aviation is the only permitted use for Halon in the U.S. The European Union has mandated the decommissioning of nearly all Halon extinguishers and suppression systems, such as those over grills and stoves in commercial kitchens, by December 31, 2003.

Our current stocks of Halon consist of product recycled from other extinguishing systems. Sooner or later, those stocks will dry up. Replacements now coming on the market are far more environmentally friendly and without dangerous toxicity, but they have their own drawbacks.

Here’s a look at what’s out there, with some specific recommendations for extinguishers. The assumption here is that you should have one; this is basic safety equipment as important as seatbelts and back-up gyros.

You may be surprised to learn that Part 91 of the FARs does not require that light-piston GA aircraft carry fire extinguishers, although they are required in commercial operations, for large(more than 12,500 pounds) and turbine-powered multiengine airplanes and in transport-category aircraft.

In 1984, the FAA issued the current Advisory Circular on handheld fire extinguishers (AC20-42C). Although it should be updated to cover the new extinguishing agents that replace Halon, the AC still provides good guidance and recommendations. It strongly encourages the use of Halon-filled handheld extinguishers in aircraft. Halon is a halogenated hydrocarbon, consisting of a potpourri of carbon, fluorine, chlorine and bromine atoms.

Halon is a liquefied gas in the extinguisher itself and comes in several varieties denoted by four-digit names, such as Halon 1211and Halon 1301. (For the curious, those numbers signify the number of carbon, fluorine, chlorine and bromine atoms present in each molecule of the agent.) These variants of Halon have different properties that we’ll cover later. They are all effective in interrupting the combustion process, as opposed to smothering the fire, as other agents do. They leave no residue to corrode avionics or airframes.

The downside of Halon is that it, like CFCs which were used as propellants in aerosol cans, has been identified as contributing to the depletion of the ozone layer. While the 1987 United Nations Montreal protocol, signed by the U.S. and nearly 100 other nations dealt a death blow to Halon for nearly all purposes, aviation was permitted to continue its use “until further notice.”

This is because no effective substitute agents for fire fighting in aircraft had been found. At the time of the protocol, no other agent had been identified that could meet the volume, weight, effectiveness and toxicity demands of aviation.

With this much economic push toward finding a new agent, the FAA in 1993 started a program to find a Halon replacement. After as low start and years of dawdling, the process has preliminarily qualified several new agents, including Halotron I, for aviation use. With this development, it’s quite likely that the UN will remove the aviation exception permitting Halon use in the coming years. This will eventually force the market to use one of the replacement agents.

Because with few exceptions, private GA aircraft aren’t required by the regulations to carry a fire extinguisher on board, we can choose to ignore the FAA recommendations and buy an extinguisher that makes sense and, possibly, saves some cash. Is cheaper better? In this case, probably not.

We recommend without equivocation that every aircraft should have a properly maintained extinguisher on board. Even beyond the specter of inflight fires, why be helpless and pitiful watching your machine melt to puddles of molten aluminum on the ramp when a shot from a handheld extinguisher could have put out a fire caused by poor starting procedures or an electrical short? Few ramps are equipped with sufficient extinguishers that you could find in a hurry, so carry your own.

In deciding what type of device to buy, the best advice is to purchase either a Halon extinguisher while they are still available (and they are).

Even Greens shouldn’t blanche at the prospect of using a Halon extinguisher in a pinch, because the marginal detriment to the environment through occasional emergency discharge of a 2.5-pound bottle is utterly in significant compared to the large-scale discharges of Halon that used to occur in military exercises.

Halon has been and remains the gold-standard for fire suppression, both in terms of its efficiency in snuffing out fires as well as its tolerable effects on humans in closed quarters, with the Halon replacements that recently passed FAA testing also being acceptable in this regard.

Take 12 ounces of avgas, mix with rag and two pyromaniacs, add one match and you get the conflagration at left. This isn’t the sort of fire you’d expect to encounter in a cockpit but it could occur outside the airplane after a botched winter start. A one-pound Halon 1301 extinguisher with nitrogen propellant-not the ideal-handled the fire, but barely. It provided 20 seconds of minimal discharge. A 14-ouncedual-Halon unit was dramatically more effective, dousing the fire in under four seconds. But it provided only 14 seconds of total discharge. Conclusion: the larger the extinguisher you can carry, the better.

That’s not to say that Halon and its combustion products can’t be toxic. The AC recognizes that high levels of exposure may result in dizziness, impaired coordination and reduced mental sharp-ness. But other agents, such as dry chemicals and CO2, have more serious adverse effects on humans and equipment.

The fire threat in an aircraft is a mixed bag of ordinary combustible materials. Burning fabrics, headliners, rubber and plastic are known as Class A fires. Fires fueled by flammable liquids are called Class B fires and fires involving energized electrical equipment where the non-conductivity of the extinguishing agent is critical are considered Class C fires. Any fire extinguishing agent for aircraft needs to be effective on all of these types of fires, relatively light in weight and of low toxicity to humans in the closed cabin environment. Remember, a standard part of most inflight fire checklists is to cut off ventilation, but check your AFM.

You can buy carbon dioxide extinguishers that are appropriate for Class B and C fires and you may think that since CO2 is an inert gas, it would be ideal for closed-cabin use. That’s not quite right, for several reasons.

CO2 extinguishers are heavy. To get the same firefighting potential out of a CO2 extinguisher for Band C class fires as a 3-poundbottle of Halon, the CO2 extinguisher will tip the scales at 14 pounds and cost around $200. More important, discharged into a closed cabin and in concentrations necessary to put out a fire, CO2 won’t leave enough oxygen to sustain life.

You need about a 34 percent concentration of CO2 to snuff out a fire, but at concentrations above 9 percent, loss of consciousness will occur. Death follows for concentrations above 20 percent for more than 20 minutes. CO2 is also hard on avionics, because on discharge, the expansion of the gas results in a rapid, deep cooling that will cold-shock components. So, CO2 is a good choice for the hangar or the ramp, but it’s a non-starter for the cockpit. It is, in fact, a hazard in the cockpit.

Dry chemical extinguishers are ubiquitous around hardware stores; small wonder since they are effective at home on a wide range of fires and they’re cheap. Less than $20 will get you about 2.5 pounds of monoammonium phosphate, a common dry chemical agent.

Blow a bottle in the cabin, however, and you’ll likely be scraping a layer of it off the windows in order to maneuver the aircraft to a safe off-airport emergency landing. That is, assuming that you survive the experience in good enough shape to land.

The powder is a fine, white material that will create dense, choking clouds of white dust. Some years ago, when we researched our first article on fire extinguishers, we discharged some dry powder extinguishers into a simulated cabin. The results were ugly.

The powder is dense enough to cause temporary breathing problems. It will also corrode the avionics and wiring to the point where thousands of dollars in unnecessary damage may be done by the extinguisher itself. Advice: if you have a dry powder extinguisher in the cockpit, get rid of it. It’s not even suitable for hangar use.

Halon is superior to these alternatives in that it’s several times more effective as an extinguishing agent per unit of weight than CO2, it leaves no residue, doesn’t corrode avionics and other aircraft parts, doesn’t impair vision and it doesn’t freeze surfaces, as CO2 does.

Halon is available on the market in two variants of interest to pilots: Halon 1211 and Halon1301. Both are excellent and non-corrosive fire-fighting agents, although their qualities differ. Halon 1211 is what’s known as a “streaming agent,” because the agent shoots out in what is mostly a stream of liquid. Halon 1301 is a “flooding agent” and discharges mostly as a gas, giving better penetration into compact areas such as under the panel.

Halon 1301 is less prone than Halon 1211 to making undesirable decomposition products, as reflected in FAA’s suggestion that the concentration of Halon 1211 agent should not exceed 4 percent by volume of the enclosed space if the occupants can escape within 1minute, while the comparable upper-end percentage for Halon1301 is 10 percent. Various combinations of these two forms of Halon are marketed, which provide both streaming and flooding capability.

Halon experts recommend, by the way, that the material be directed into closed spaces rather than opening them up to expose the fire. For example, if you had an engine fire on the ground, don’t try to open the cowl to extinguish it but direct the Halon through the cowl openings.

We performed a limited, non-scientific practical test of CO2,Halon and dry chemical extinguishers. With a piece of FAR-compliant interior fabric mounted on a foam backing board not unlike what you’d find inside many GA aircraft and some gasoline applied, we had our flaming test bed.

As shown in the photos, Halon put out the fire, once and for all, with a minimum of fuss, muss and time. There was no re-ignition after only part of a 2 1/2 pound bottle was used. But we were still glad that there was more material in the extinguisher if needed. CO2,on the other hand, took about twice as long as Halon to put out the blaze. More worrisome, once the fire appeared to be out, it flamed back and needed to be smothered again with the CO2. The several types of dry chemicals we tested were each nearly as effective as Halon in extinguishing the fire. They emerge from the nozzle in a robust, focused stream. But the resulting mess was a sight to behold, with powders wirling in the light breeze and coating the entire area. One can only imagine trying to fly after one of these bottles was discharged in a closed cabin: parachutes would probably be preferable.

View all our distributors